The Secret of Margareta’s Ring

In 1396 the Loka custodian Nikolaj of Loka ordered the town jeweller and engraver to make a magic ring with the inscription Caspar Melchior Baltasar, which was supposed to protect the wearer of the ring from diseases and various dangers. Nikolaj of Loka gave the ring to Barbara Lambergar, a lady from Škofja Loka, who in 1439 left it to her granddaughter Margareta. Since many had tried to steal the ring, Barbara hid it and in her will and diary wrote instructions how to find it. They were difficult times for the Loka dominion, as bloody battles were being played out on its borders between the Counts of Celje and the Habsburgs. The town was beseiged by the Celje commander-in-chief Jan Vitovec. Margareta made a quick getaway from the town to safety, but left the ring in Škofja Loka. Your task is to find Margareta’s ring before others do and hand it to the guardian of the ring.

Hurry before the town gates close! 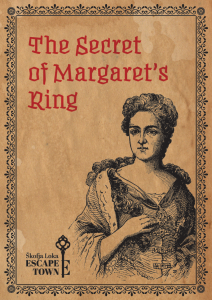 What kind of game is ‘Escape Town’? How does it differ from escape rooms?

The Escape Town game mainly takes place outside in a town environment. As is the case with escape rooms, players have to solve clues – the main difference with Escape Town is that the content has been adapted to the outside environment.

How many people can play the game?

The game is suitable for groups of 2 – 6 people.

How long does the game last?

How can I book and pay for the game?

Bookings can be made via the website https://www.pobegizmesta.si/rezervacija/ where a free time slot and method of payment can be chosen.